Hazel Onou, also known as White Money, who won Big Brother Naija 2021, has stated that he wants to use his new chieftaincy rank to motivate the young people in his community.

The reality television personality was speaking just a day after becoming the “gwù di Igbo,” or “The Pride of Igbos,” and receiving a chieftaincy title. 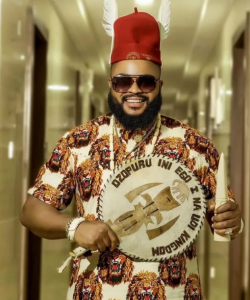 White Money claimed that the reason he was given the title was because young people look forward to him as a role model for advancing Igbo cultural beliefs.

On Tuesday, November 1, 2022, the businessman made this claim in a special interview with Midweek Entertainment.

He said; “I intend to use my title and position as ńwà àfòr Igbo to positively influence the youths in my community. I will actively engage and mentor them as much as possible because I understand that so many of them look up to me.

“They were inspired to confer me with the chieftaincy title as the Pride of Igbos in Lagos State because of how I generally promote and uphold the values of the Igbo culture.

“They believe that I am a good fit and a role model to the Igbo youths in my community because of how I faced hardship while growing up and how I was able to persevere positively with hard work, God and determination.

“Everyone knows how particular I am about my culture, so it was only right to add a title to it in Lagos State by my community. I’ve learnt that all that glitters is not gold and that no one can be there for you and inspire you more than yourself.”

After receiving an honor on Monday, a delighted White Money posted on Instagram: ”

First of all, our people say when a child washes his hands well, he may sit with elders. Another title added: UGWU NDIGBO’ i.e ‘THE PRIDE OF IGBOS’.

“It was another humbling moment for me last Saturday as I was conferred as ‘UGWU NDIGBO’ by the Igbo speaking community, Lagos State.”

Actress like Faithia Balogun, Bimbo Thomas, Wummi Toriola and others flaunts their Ashoebi as they s...
Comedian Woli agba and Lateef Adedimeji shares beautiful video as they visit old tafford
Actress Nkechi Blessing writes epistles to celebrates her new lover birthday
You don reach last Bus stop ~ Nollywood actor Lateef adedimeji order her wife to the bedroom as she'...
MC Oluomo celebrate his daughter as she bag second degree in US