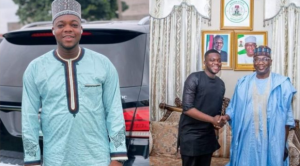 His Excellency Abdulrahman Abdulrazaq, the governor of Kwara State, has chosen Abdulgafar Ahmed Abiola, commonly known as Cute Abiola or Lawyer Kunle, a popular Nigerian comedian and skit creator, as his special assistant on the creative industries.

The Governor of Kwara State, His Excellency Abdulrahman Abdulrazaq, has selected certain youths as Special Assistants to the State government in an effort to give young people and women an opportunity in his administration.

Cute Abiola is one of the competent young people he chose. A short while ago, the appointment was announced on the Facebook page of the State Government.

Cute Abiola hails from Ilorin, Kwara State, Nigeria, the article claims. He is one of the comedians and sketch creators in Nigeria’s entertainment sector who is currently performing well. He has a degree from the Kwara State Polytechnic in Ilorin and is also a naval officer.

Cute Abiola is the most recent entertainer to receive a political post in Nigeria as a result of this development. Congratulations on being chosen as the Special Assistant on Creative Industries by the Governor of his State (Kwara State).