DOES CYPRIAN F. EDWARD-EKPO BOOK’S SIX ‘DECADES OF A MISSING PRESIDENT’ TRULY DEFINES THE SOLUTION TO THE PROBLEMS? 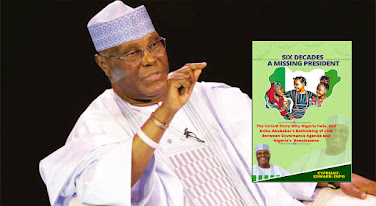 Amongst the many problems that seem to have slowed growth and developmental projects in Nigeria, is poor Leadership. Nigeria has been shaken by the impact of extreme poverty with huge domestic and foreign debts, an upsurge of a plethora of social vices – terrorism, genocidal killings, kidnapping, incessant ethno-religious violence, bereavement of health system, mental health problems manifesting suicide, among other conditions that demonstrate failure of government and a large gap between the governing authority and the citizenry, the Rule of law, knowledge system, competence and patriotism.

After the civil unrest tagged “End SARS protest” that gripped the country in October 2020 along with exacerbated terror actions and geo-ethno groups’ violence and killings with accentuated economic failures and administrative incompetence.

As Nigeria prepare to go to the ballot, a lot of questions abound on who would eventually hold the mantle of Leadership. And what are the possibilities of a  different spice to where Nigerians are agitating for?

In his recent book titled ‘SIX DECADES A MISSING PRESIDENT’, Cyprian F. Edward-Ekpo who is a Registrar of the International Institute for Humanitarian & Environmental Law, and legal researcher, scholar, and human rights advocate – dotted key issues that have labeled around Nigeria’s decade-long problems.

He approached the book with some untold Story Why Nigeria Fails, and Atiku Abubakar’s Rethinking of Link between Governance Agenda and Nigeria’s Renaissance. He scribbled some detailed directions to go; and further gave credence to Former Vice President and Presidential Candidate, Atiku’s Five-Point Agenda. His Manifesto on how to restore seems to have won his analytical appreciation.

In the book’s seventh chapter, Cyprian F. Edward-Ekpo touched on the pragmatic sense of Atiku’s Five-Point Agenda is examined – on how he hopes to achieve the same, and what methodology for the achievement. The Agenda has stated its commitment to achievement through:

– Restoration of Nigeria’s unity through equity, social justice as well as cooperation and consensus amongst heterogeneous people.

– Establishment of a strong and effective democratic government that guarantees the safety and security of life and property.

– Building a strong, resilient, and prosperous economy that creates jobs and wealth and lift the poor out of poverty.

– Improvement and strengthening of the education system to equip its recipients with the education and skills required to be competitive in the new global order which is driven by innovation, science, and technology and to lead healthy, productive, and meaningful lives.

– In his Conclusion, he agreed that it seems that credibility and pragmatism contained in Atiku Abubakar’s Five-Point Agenda with regards to resolving the endemic problems of Nigeria are hidden particularly from those who only see in the general norm than analytical values and practicality. What are the social conditions that are responsible for the prospects of the Five-Point Agenda to be hidden from a vast majority of Nigerians is an important social question.