How Can Nigeria Choose Rochas? 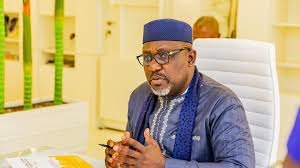 Aspirants to the presidency these days, all go to Aso Villa as a new kind of pilgrimage. The senator though did the right thing. President Buhari would like him. It was a big plus for their political party. He detailed his guiding beliefs to the Nigerian people and put forward a brief account of the programs he thinks is mandatory to take the country to greatness. An envious critic said he thought he was Obama. No, it is called doing things right. It is the revolutionary way, to benchmark – a point of reference against which things may be assessed.

Senator Rochas Okorocha understands that true allegiance is owed to the people and to the constitution. All the time he has shown regard to any and all Nigerian presidents as well as reverence for the highest office of the land. However he does not sell himself short. That has made Rochas to be the candidate for the youth.

Even those who are not his active supporters, admit that he is one senator who wears that toga with the dignity and gravitas of the office. He thrives on challenge and constantly sets goals for himself.

This is no longer the era where political office holders point to kilometers of roads built or dilapidated school blocks they have renovated as achievement in office. These things are the barest essential thing to do in public office.

When he was governor in Imo state, he rather showed remarkable courage in doing whatever needed to be done. To a visitor, Owerri the state capital seemed to be defined by one or two major roads only. Governor Rochas carried out a robust and courageous town-planning expansion to the city that was remarkable. He was very deliberate and careful in doing the work. In fact it became the pin-up piece for architects and town planners. This kind of courage and vision is essential, in fact necessary for today’s president.

In his agenda, the senator Rochas places a high premium on education. How did South Korea develop so quickly? That country has almost no natural resources but has nonetheless a high population density in its territory. So similarly in our case Rochas wants a highly motivated and educated populace to spur high tech boom and bring rapid economic development. Senator Okorocha seems to like what President Buhari has achieved in agriculture. He has elaborated on his plans for security, on law and order, on what to do to grow the economy and achieve our rise to greatness.

In a political season that has pitted merit against zoning, Senator Rochas Okorocha has taken the option out of the thing. He is the choice that satisfies the zoning consensus without sacrificing merit. He straddles both options.

So what is left obviously, is for the South East to get their ducks in a row and for the party to which the Owelle Rochas Okorocha belongs to understand its zeitgeist, the defining political spirit or mood of the time we are in.

Actor Yomi Fabiyi Cries out over the trap his second wife set for him
Actress Toyin Abraham and husband Kola Ajeyemi reacts to alleged marriage crisis rumour [Video]
BBNaija: many reacts as Chichi, Adekunle and sheggz burst into hot fight in the house
Actress Iyabo Ojo and others pray for Chacha Eke following her marriage crisis
Prophetess Evelyn TB Joshua: How the Woman in the Synagogue is Keeping the Legacy of her Late Husban...