Man sent her girlfriend parking away for pranking her with pregnancy

Man sent her girlfriend parking away for pranking her with pregnancy 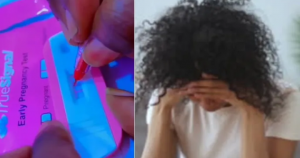 After playing a phony pregnancy joke on her partner that backfired, a Nigerian woman has been sobbing publicly.

She tampered with a pregnancy test strip to make it appear as though she was pregnant and carrying her boyfriend’s child.

Under the guise of needing the money for an abortion, the girlfriend intended to utilize the deception to extort money from him.

Unfortunately for the woman, her boyfriend ended their relationship and advised her to identify the genuine father because he was unwilling to take parental responsibility for the fictitious child.

She suffered a double loss because she was denied the money and her relationship terminated as a result of a practical joke.

She complained to her followers on her TikTok page about how a three-year romance ended because of a “harmless” joke.

CorrectNG previously reported on a young Nigerian woman who played a joke on her lover by pretending to be pregnant in order to gauge his reaction.

He didn’t know what it was when she handed him a phony pregnancy test strip and expressed panic.

The girlfriend then went on to say that she was pregnant-free and that her boyfriend thought it was a wonderful thing because she was positive.

She nonetheless confessed that the reverse was true. When she said she was visiting her parents, he started to think about her past behaviors and what she often did.

When she finally admitted that she was only playing a joke on him, he responded by jokingly telling her to go. He declared that he would not let her ruin his life by pulling such a terrifying joke on him.

Many react as man jumps out of his expensive car to catch bus driver who's running from police [Vide...
Wizkid FC don't underestimate me I gave wizkid his first ever 1 million naira show ~ Samklef
Any man who wants to get married to me and is willing to stay at home and take care of the house whi...
Man storms his friend house and find out his girlfriend is hiding in the bathroom [watch video]
Mother of three narrates how his husband pluck out her eyes and cut her fingers out of jealousy [wat...