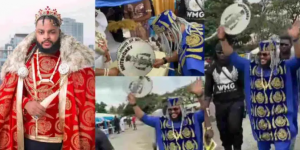 Whitemoney, a.k.a. Hazel Oyeze Onu, the winner of BBNaija season six, has been awarded a prestigious chieftaincy position.

A group of Igbo speakers in Lagos State bestowed the moniker of “Ugwu Igbo” upon the reality star.

The meaning of the term Whitemoney recently received, according to him, is “the pride of Igbos.”

He posted a video of the lavish celebration held in honor of his new position on social media.

The socialite also presented a certificate attesting to the title bestowed upon him.

“First of all, “Our People say when a child washes his hands well, he may sit with the Elders

Singer Portable captured as he was begging a woman he hits with his car in lagos state
Reactions stirs as Actor Odunlade Adekola prostate to greet Singer Yinka Ayefele at a party
Many reacts as Burna Boy reveals when he started singing
Actress MO bimbe reacts after her twinz love accused her husband Lateef Adedimeji of having a child ...
Instagram Dancer Janemena sets to welcome first child with her hubby