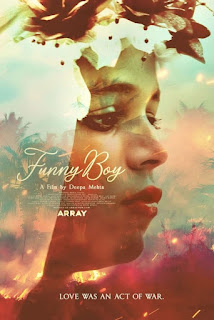 Sri Lanka of the 70’s and 80’s. The elegant world of upper class Tamils, a minority group in a largely majority Sinhalese country. At 8, Arjie loves dressing up like a bride and acting out a bridal procession with his girl cousins.

When he is discovered by the adults, he wonders why he’s being called “funny”, a word whose meaning he can’t understand, though he knows it’s a ‘bad’ thing. Arjie is taken up by his magnetic aunt Radha, who has just returned from Canada. Radha sees that Arjie is gay and is determined to protect him and build his self-worth. But her life gets complicated when she falls in love with Anil, a charismatic Sinhalese man.

Their relationship crosses ethnic boundaries in a world that simmers with tensions between the Sinhalese and Tamils. Radha must choose between her family and her lover. Arjie, witnessing his aunt’s journey, learns some bitter lessons about what is possible and not in the world. We flash forward to Arjie at 17, at a new school. There, Arjie falls …