The herbalist, who is an indigene of Osha, is popularly known by many business owners in Onitsha who usually patronise him for spiritual help concerning their businesses.

According to reports, the pastor and his wife had been searching for a child after being married for long without an issue. 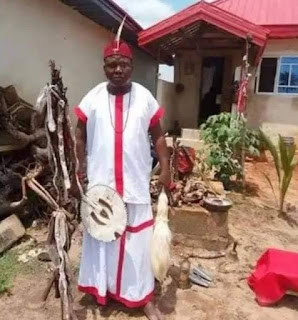 Unable to wait any further, the woman, without consulting her husband, visited the native doctor to seek solution to her childlessness, which resulted in the herbalist sleeping with her.

The herbalist confronted the pastor and revealed what transpired between him and the cleric’s wife, and that he is responsible for the pregnancy.

The wife admitted when she was summoned as she confirmed it was the herbalist that got her pregnant, which made the pastor to send her packing from his house.

The community received the news with shock as many wondered how it happened since the two involved are of different religious backgrounds.

Wizkid FC don't underestimate me I gave wizkid his first ever 1 million naira show ~ Samklef
Female prophet gives church member her bre*st to suck, calls it holy milk (Video)
Nigerian man show off the the he saved for 124 days for not drinking
Young boy stands under a heavy rain singing love song to the girl she love as she's inside the room
Kenya man in shock as his in-laws told him to cook when he showed up with bride price