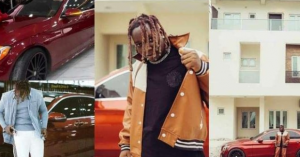 Akintunde Abiodun Timileyin, popularly known as TI Blaze, a rising singer, is celebrating twice because he just bought a new house and vehicle.

The singer, whose career took off with the publication of his remix of “Sometimes,” has now joined the ranks of landlords.

TI Blaze claimed on Instagram that he had just spent millions on a new home and vehicle.

TI Blaze thanks Olamide for his new home and vehicle TI Blaze credited Olamide, a singer, for opening doors for him.

He thanked the head of the record company and declared his love for him.

Olamide Badoo! I love you till eternity”.