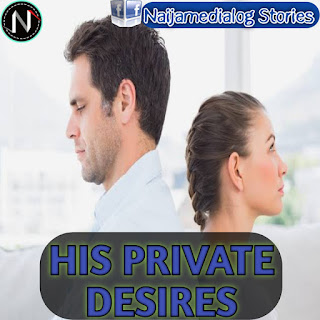 🎦HIS PRIVATE
DESIRES 💋
(Mr Handsome and I)
Episode 17& 18
(Brought to you by authoress Chi Admins )
****************
🌝 NADINE 🌝
I laid on my bed thinking about Javier, not only the fear of regaining his memory is bothering me, but also the fear of him leaving for that bitch.
What am I even thinking? How am I sure she’s the one anyway? For goodness sake, its possible she’s a different Jasmine and has no connection with Javier.
hi peacemaker to be added you to d group +2348037873157
But still, I felt unsecured around her and hated her for what she did to my dress.
I stood up and picked up the clothes that was torn by that mad girl and started putting it together, it’s not like I have money for the amendment ,I thought until I heard my moms voice.
“Nadine, where’s Javier?” She asked
“He’s in his room”, I replied
“He’s not”, she answers with some kinda expression i don’t understand.
“He should be in the balcony then”,I told her and was about resuming what I was doing when she spoke again ,
“He’s not anywhere around this house”, she panicked.
“What???”
I suddenly remembered he saw that bitch and got scared he might have gone  there to look for her,
That thought only made me crazy,
I ran out of the room as I dashed towards the mall.
😇JAVIER 😇
We got home and both of us separated ways,
Although Nadine is behaving strange and has went into her room,But I thought better than to follow her,I just went to my room instead.
“That lady” I thought
I have to go back to the mall,I might get some useful information about myself,
I couldn’t tell why, but she felt like someone I knew.
There was just something about her.
I set out to the dusty road, after a tiresome journey,
I saw the girl whose face was familiar slapping an old woman, old enough to born her.
“How rude,I thought.
I watched them from afar, she took her purse and left,but something fell off her purse.
I quickly rushed over and picked it,I realised it was a phone.
Javier! I heard someone called
It was Nadine .
Whaaat?
I quickly hid the phone in my pocket.
“Javier!” She called in relief and jumped on me immediately, hugging me tight.
Oops!
“Why did you leave? You got us worried”. she asked making a poker face
I’m sorry,I…I just…” I stuttered and paused.
I didn’t want to tell her about it – I didn’t want her to know I’d come after someone.
“Were you….looking for someone?” She asked and I hoped it wasn’t what I was thinking.
“I just wanted to ask for price of something. I’m sorry I left without telling you. Come on” I replied quickly and held her hand and started walking away.
I didn’t want her to say anything more.
Thank goodness I still had the phone with me.
😵JASMINE😵
“I got home later after that stupid filthy old woman called me a spoilt brat for nagging at a poor girl cause of my riches,
I went inside and showered, I later came back to the room,
How sweet will it be if Javier is to be here,I thought tears streaking my cheeks,
I reached out to my purse to get my phone, but later found out its not there
What?
Where’s my phone????
Tbc
Will Javier be able to get any information from the phone?