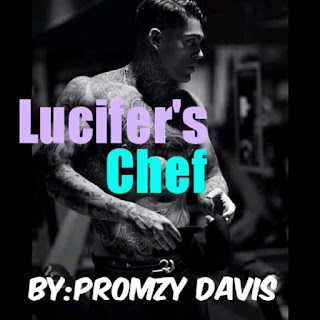 👤Lucifer’s
Chef🍜
(His wild desires)
©PROMISE DAVIS MAUREEN
(Voice alone got me wet)
🌮Episode 7🌮
💄Calla’s POV💄
I was curious to know what he have to say, but also nervous because I’m f**king naked under thin towel.
I cleared my throat and composed myself.
“What do you mean by that?” I asked casually, I proved not to be interested in what he have got to say but I am.
He stood up and deep his hands inside his pant pocket.
“First, your work in this house is just to cook, you’re not permitted to come upstairs unless asked to.” He said and I forced myself not to roll my eyes even though he won’t see it if I did.
“Is that all Lucifer?” I asked calmly but he didn’t replied.
“Your salary will be $60,000 each month,” he added and my mouth dropped wide open.
Double of my previous salary, the f**k!
A little smile grimaced my lips but I shake it off immediately.
“Thank you Lucy,” I mumbled.
I felt him tensed at the mention of the nickname I got him.
Oh gosh did….did I do something wrong again?
The room was quiet again and an unknown tension building between us.
I felt his pair of rainbow eyes on me.
My leg became wobble, I backed up against the wall and held tightly on my towel.
I look everywhere but not him, I don’t want to make the mistake of that again(looking into his eyes)
“I don’t tolerate any mistake Calla, I like my breakfast to be served exactly 7:20am,” he began, phew! At least I’m not in trouble.
I couldn’t listen more to what he have to say.
His voice alone is making me wet.
I don’t understand why my body is acting this way around him.
I wanted to scold myself, but my body just felt like a complete different person right now.
I shut my eyes and tilt it back.
He turned towards the door and I contemplate whether to tell him about my current situation.
“I…I…don’t have a change of cloth,” I said to him before he could open the door.
His hand stopped mid air.
My gaze were on his chest as he turned to face me again.
I couldn’t stop the wild thoughts going on in my head.
The thoughts of how it will feel to run my hands on his bare chest, feeling his body against mine.
Damn, the room was getting hotter than normal.
“Follow me,” he said before walking out of the room.
I quickly follow him, seeing him walk in front of me makes me feel a nostalgia I never felt before.
His height, the way a powerful heat radiate from his body.
Somehow I became calm, just staring at his back and thinking about how many tattoos he have under that shirt.
The tattoos spread from his body to his neck and hands.
How can someone have so much tattoos on them?
He stopped in front of his room and I halt, two meters away from each other.
He slowly pushed the door open and walk in closing it behind him.
Two minutes later the door opened and he held out a cloth for me.
I briskly walked towards him and collected the cloth not without our hand brushing against each other.
I sucked in a sharp breath at the feeling I felt at that moment.
I ran out on him and started panting heavily immediately I got inside my room.
What is wrong with me?
I can’t possibly develop a feeling for a man who won’t waste time in killing me whenever he want to.
Am I going crazy or what is this feeling?
Why am I like this?
Arles!
I need to call him.
I wore the big shirt he got for me and chuckled.
Under this shirt I’m practically naked.
How do I tell him that I’ve got no underwear?
Huh, I won’t even dare do that.
I walk out of my room and walk inside the kitchen, my stomach was growling and needs some food.
I opened the pot and found the remaining food that I left inside, I dish it out inside a plate and sat down on the kitchen bench.
I started eating while scrolling through my contacts to find Arles’s.
I finally found it and a little smile displayed on my lip.
I definitely miss him.
Arles and I have been friends from college.
When I was a freshman in college he was a senior back then and he graduated the same year.
He has been so supported me but financially and relationship wise.
He is like a older brother I never had.
He is a lawyer, sometimes I wonder how we both never dated.
He make it clear many times that he only sees me as a younger sister.
I took a bite of the pasta and moan quietly, I closed my eyes and savored the taste but then opened up when I felt like someone was watching me.
I looked back and was met with two pairs of rainbow eyes.
Crap! Our eyes met again!
I’m really dead now!
What is he doing here anyway?
This house is his dummy!
T.b.c
Next chapter will be Lucifer’s POV.
Hope y’all ready for it!
If you read this episode please click on the like and comment, try and share for others to read too!