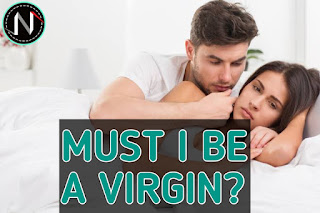 💔MUST I BE A VIRGIN💔
Ep 12
Teniola has finally taken over my position.🤣🤣🤣Wow! I love that cos he was the one that really wants to marry a virgin.. He got what he want. Years later, ike now engaged in full sexual activities for payment. Olosho, original prostitute.She would bring home different gift for her mother and finally ignored her husband.
One day she was back from her business as usual. Teniola questioned her about where she was coming from. She hissed and was about entering their room, he pulled her back and landed a hot slapped on her cheek.She screamed and my aunty ran out, she saw Ike holding her cheek, my Aunty slapped him back, before he knew what was happening he landed in the hospital after getting  terroly beating by my aunt and her daughter. He spent good 3 weeks in the hospital. My aunty and Ike didn’t bother to pay him a visit. He promised himself to show them. Months later something terribled happened, Ike came home around 3 pm in the night, my aunty was also in the living room expecting her daughter, she walked in majestically. Her husband rained her with questions, her replied was hot slapped on Teniola’s cheek. He smiled, unfortunately Teniola has prepared an acid, because he knew my aunty was always in support of her daughter bad behavior. He walked in and was out after some minutes. He moved closer to them, as he wanted to spilled it on Ike’s body, it got spilled on my aunty’s face and body. She screamed, the acid splashed all over her body. She was rushed to the hospital. Ike called the police and UncleT was arrested. My poor aunty spent good 5 months in the hospital. Though her body was healed, but she lost her sight. Still in the hospital, Ike got sick and went for test. She was tested HIV positive. She cried and later abandoned my aunty in the hospital for ruining her life. She spent another 3 months in the hospital without nobody staying with her. Her own daughter abandoned her.She was pushed out of the hospital when she was unable to pay them. She already sold all her properties including her husband’s house. There was nothing left for her. She gave one of the nurse her phone book, to help her call Alhaji’s num.
Likes and comments to unlock next ep.
Last ep loading