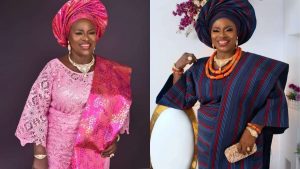 Idowu Phillips, a seasoned Nollywood actress who later became a prophetess and went by the stage name Mama Rainbow, recalled how one of her kids had tried to convert her to witchcraft.

The veteran said how he nearly persuaded her to join the feared group so she might become wealthy.

The veteran admitted in an interview with Daily Trust that she struggled financially in the beginning of her profession, particularly because she had to raise their children alone after Femi, her husband, passed away a few years into their marriage.

The prophetess described how one of her favorite children, who didn’t share her religious convictions, suggested that she become a witch so they might become wealthy.

It was tough; after prayers, some of them would always cry. Whenever one of my sons saw me with a Bible he would ask what I was doing with it. At a point, he said he would take me to where I could become a witch and I agreed. He said that once I became a witch we would be okay

After she finally gave in and went with him, Mama Rainbow continued.

Her son, however, forced her to leave after realizing the cost.

“I agreed and he took me somewhere, but before God and man, when I got there and they told me the requirements, I was shocked. They said it was the child I loved the most that would be used for sacrifice.

“I told the person that it was the child I loved most that brought me to the place. At that point, my son held my hand and said it was time to go home.”