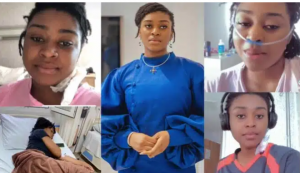 A young woman explains how her two failing kidneys started functioning normally without the need for dialysis as she gives testimony to the grace of God in her life.

The young woman said that what had initially been identified as malaria in October had instead turned out to be end-stage kidney failure.

After the diagnosis, medical treatments to address the issue had started, and a catheter was placed to her neck in order to clear her blood four times per week.

She admitted that despite feeling mentally and physically exhausted and worn out, she nevertheless managed to praise God.

She started significantly dropping weight 23 days after hospitalization. Doctors informed her that her kidneys had recovered nicely and had miraculously healed, therefore God provided for her.

We just wanna get richer everyday ~ Tonto dike opens up to the lady who advice her on getting marrie...
Temilade Kosoko reveals how her prank wedding went viral and what she gain in return
Reactions as Comedian Carter Efe perform MACHALA to the crowd
"Yahoo boys dey learn" ~ Dancer Korra Obidi shares her experience as she encounters Mexican Fraudste...
Former BBN Housemates Daniella reveals what attracted her to Khalid